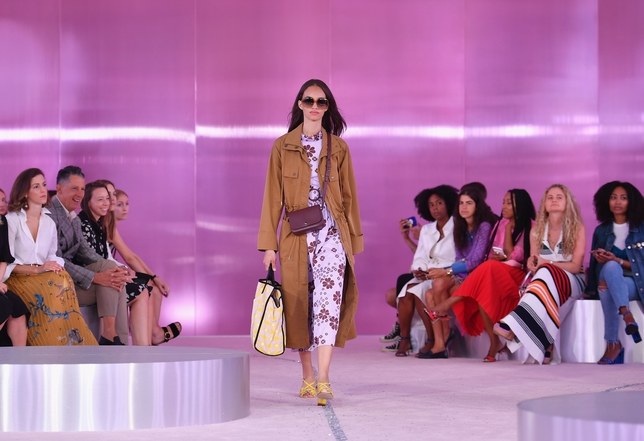 A rosy hue washed over a room at the New York Public Library as models wearing vibrant pinks, greens and blues followed a winding silver line of glitter on a pink carpet. The shimmering line was an homage to the late designer Kate Spade at the New York Fashion Week show of her former brand.

Although Spade hadn’t worked at her namesake label since she sold her stake in 2006, her name and persona was forever linked to the label, and this fashion show marked the brand’s first major presentation since Spade’s tragic death by suicide in June. She was just 55 years old.

When guests arrived on Friday, there was a note on their seats saying “she left a little sparkle everywhere she went. in loving memory 1962-2018.”

The other card left on attendees’ seats featured a description of the forthcoming season by the brand’s current designer, Nicola Glass. Glass notes that she looked back to look forward, writing that spring 2019’s season is “a journey that starts at the beginning to form new paths.” She also wrote that she looked at “original codes of the house refined and evolved in unique ways,” “a thoughtful approach to design,” and “it’s the little things that mean the most.”